“Rising up, straight to the top
Had the guts, got the glory
Went the distance, now I’m not gonna stop
Just a man and his will to survive

It’s the eye of the tiger
It’s the thrill of the fight” – Survivor, Eye of the Tiger

So, I had to pick this song as the title for the week I ran my last 20 miler because of the Rocky connection to Philadelphia. Thanks to Jen for suggesting it.

I went into this last really long run with a sense of dread. I mean the last one went so badly (puking, walking, unhappy IT band) why did I think this one would go well? Are middle-aged, pudgy moms really supposed to run 20 miles at one time? Are we supposed to pound the pavement for 16 weeks with no break and expect to remain still standing at the end? Apparently, we are.

I laid all my clothes out, like I always do the night before an early morning run. Dimity suggested using the run as a true dry run for Philly. I chose the capris, shoes and warm weather option shirt I plan to wear at the race. My long sleeve option is in the works – Another Mother Runner is getting custom special shirts to wear in Philly. We’re also getting gray hoodies so we can re-enact the stair scene from Rocky!

This is after the run but you get the drift. My shirt is courtesy of Another Mother Runner and it says “Are My Kids Still Chasing Me?”. The answer is no because no one is chasing you after 20 miles! This shirt got a lot of laughs from the other mothers in my group.

Jen and I agreed to run this last really long run at an easy pace. We have trouble pacing ourselves and you have to pace yourself when you are running 20 miles. The half marathon ladies from Team Indiana Jones had to run their 13 miles before the taper so we knew we’d have lots of company for at least 13 miles. We made sure to stay behind the half marathoners for the first 13 miles to insure we maintained an appropriate pace. It saved us in the end.

I have to give major credit to Jen for her positive attitude during this run. She framed everything in a positive way – instead of “we have to run 20 miles”, it was “we get to run 20 miles”. She kept my spirits up. For the first time ever, I ran a significant distance without turning on my music once. There was no need when you have such great company along the way! The group talked about all kinds of things during the run. I can’t even begin to put into words what happens when you run long with the same group of women for 12 weeks. Nothing is off limits and nothing is TMI. The miles just fly by. I am so lucky to be a part of the great Fleet Feet running groups. I have made wonderful friends and met people I would not have met any other way.

Something really sweet happened while we were still with the group. One of the women in our group is training for her first half marathon. The group was running 13 miles and it was going to be her longest run, ever. On the trail, at one of the cross-streets, her husband met her with her two kids. They all ran out to give her hugs and she continued on the run. We all got a little teary, I think. There is nothing I love more during a run or a race than seeing a fellow mother runner getting some love from her kids.

Jen and I knew we were doing well, when each time my Garmin beeped for our walk interval, we were surprised that the 5 minutes went by so fast. There have been runs where I am praying to hear the beep and it does not come for an eternity. Always, a bad sign. Not so on Saturday. Sara is finally on the mend from her glute injury and agreed to join us for the last 6 miles of our 20 miler, which was wonderful. Having someone with fresh legs makes a huge difference. At the turnaround on the last stretch, Jen started singing the theme to Rocky, Sara and I joined in. A couple of bikers passed us with weird looks but I don’t think we cared at that point!

Jen, Me and Sara

I learned some valuable lessons on this run. The first lesson is that I CAN do hard things. I now know that, while it will be hard, I can and will finish a marathon. I also learned that the last 6.2 miles will probably be one of the hardest things I have ever done. I finished 20 miles and did not feel awful but I will have to stay on my feet for another hour beyond what I just did. I learned that you really do have to eat a lot of food the day before a very long run. The idea of not eating and torching massive amounts of calories is not realistic (thank you, Eating Disorder I Developed in College, for continuing to warp my eating habits). I also learned that I still have not perfectly nailed my nutrition challenges out on the run. I did much better this time but I got a little headachy and light headed at about mile 18 and had to take a few more walk breaks. I have 26 days to figure this one out. I also learned that Jen and Sara are two of the best running friends a girl can have.

So, what do mother runners do after nailing a 20 mile run? We go shopping, of course. Our post shopping spree picture! I love Jen’s new top and I envy her height and long torso because I covet that running tunic!! I, of course, opted for yet another article of running apparel in black because I will stop wearing black when they invent a darker color. 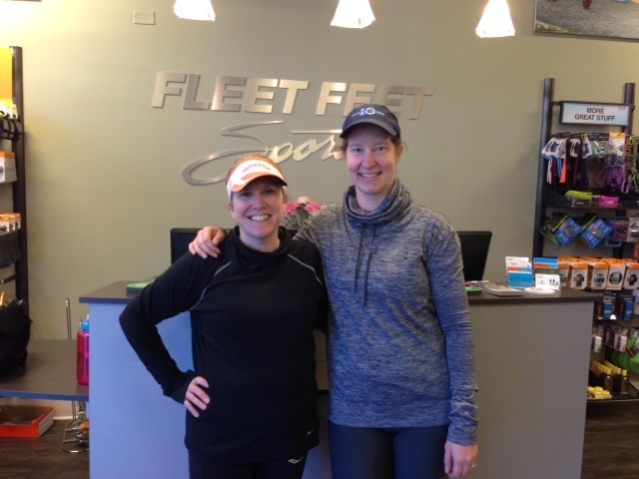 I knew Dimity was probably at a Saturday morning sporting event with one of her kids but I had to call her when I got in the car to drive home to tell her I nailed it. She was genuinely happy for me and I think she is probably less worried about whether or not she is going to have to give me a piggyback ride to the finish in Philly. She posted this awesome quote on Twitter after we got off the phone and I felt the AMR Tribe love from afar. Now, we start the taper and I have no idea what I am going to do with all my free time! I don’t do waiting well. 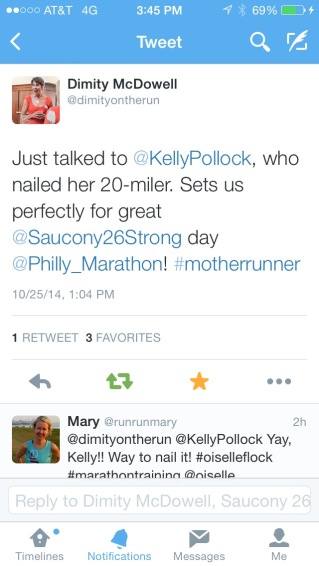