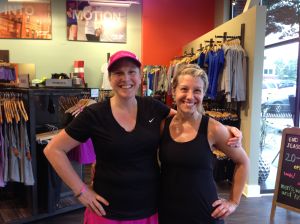 Me and Laurie at Fleet Feet after our run.

I’ve been waiting for this moment and this post for a long time. I wanted to write about that moment when, while out on a long run, I felt like this was possible. A rising, of sorts, from my old, slow self to my new self. The self that can cross the finish line at Philadelphia, with my head up and some air still under my feet. I felt that this week. I have this song on my running mix and I listen to it each run, waiting for that moment.

I know this is just a blog about running and that training for a marathon is really just a lot of running. Lots of people have run marathons and it is really not that big of a deal, in the grand scheme of things. Really, though, it is about so much more than that for me. It is about all the years I spent overweight and not happy in my own body. All those times I doubted my ability. It is about all those times I told myself I could not do something but now I know I can. Running for me, is a catharsis of sorts. I really do leave all my fears, frustrations, stress, inadequacies behind me after a run. it is not something I can easily explain to non-runners without sounding cliched and a little insane. People who run for the love of running and not just because they need the exercise probably get it. It is an obsession, a drug, a necessity.

So, how did my rising happen? First, we had a break in the weather. It was overcast and pretty sticky but the temperature was only in the low 70s at the start of the run. So much better than last week. Second, Laurie and Sara needed to run 15 miles for NY. I only had 14 miles on my schedule but since they have been so kind about running extra mileage with me, I hung in there during the extra mileage with them. Third, great conversation. We talked about all kinds of things on the run this morning. It was great bonding time and made the miles fly by. Fourth, I fueled right with the right amount of carb loading yesterday and my trusty Uncrustable and hydration pack with Nuun Energy. I don’t know why I think that you carb load for races but not for long training runs. Why would running 15 miles on a Saturday be any different than running 13 miles in a race? I think I am going to have to pay less attention to Weight Watchers points and more to what works. 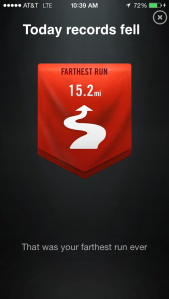 Yesterday’s run reminded me why I am doing this. For the love of running. For the joy, the freedom, the friendships and the sense of accomplishment. I know there are going to be times before November 23 when this is going to feel hard, again. Mentally, though, I needed this run. I have felt so much doubt these past weeks with the heat and nutrition issues that I was beginning to doubt if I had been overly confident in my ability to do this. I will still have doubts but, when I finished 15.2 miles strong yesterday and knew I could have gone a little bit further, I know that I just might be able to do this.

Plus, I think new running shoes always make everything better. 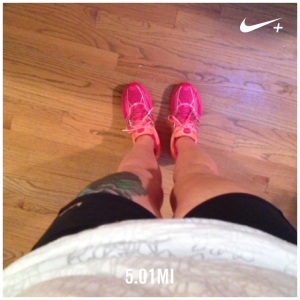