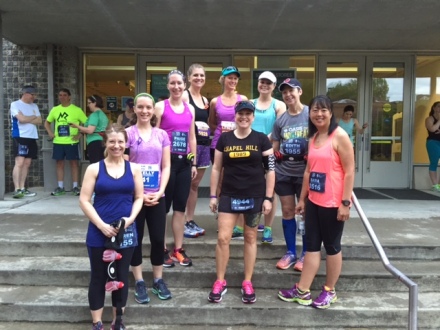 I was born and raised in Chapel Hill. I am truly Tarheel born and Tarheel bred and when I die, I’ll be Tarheel dead. My husband thinks it is a little bit crazy to pay race entry fees to run a race on streets I run on at least twice a week for free but there is nothing quite like having those streets closed and running down the middle of them with thousands of other runners. There is also no other race where I can run down the street and see my high school history teacher cheering the runners and shout out “Mr. Kiger” because old habits die hard or see so many of my classmates from the Chapel Hill High School Class of 1989 out on the course.

This race is one of my favorites because it is my hometown and the place I currently call home. The race is hilly. It is hard. It is crowded. There is a hill at mile 8.5 to mile 9.5 called Laurel Hill that has an elevation gain of 123 feet during that one mile. The name of my hometown has the word “hill” in it and it is true to its name. There is also free beer for all the runners at Top of the Hill Brewery after the race. I love beer. I really love free beer.

I was slightly concerned about my performance for this race having just come off of a PR performance at the equally hilly Rock N Roll Raleigh Half Marathon. I only did a short 3.5 mile shake out run with Fleet Feet on the Wednesday before the race mainly because there was free beer and empanadas after the run! I needed to rest my quads, which were still sore after Raleigh. My only goal for the 10 Miler is that I wanted to beat my time from last year even if was only by one second but I had no other aspirations.

Saturday morning was humid. Crazy humid. There was a lot of cloud cover before the race start. Let me diverge here for a moment, and talk about the start of this race. It is a clusterf*%k like no other race I have ever been to. There are no corrals. There are thousands of runners running a 4 mile race or the 10 mile race. They release the 4 milers first but there is no real order to this. Then, the 10  milers are supposed to go. There are thousands of people trying to cram into one area of the street. There is no way to get back to your pace group because of the massive wall of people all trying to get to their pace group and the narrow sidewalk. Someone had the not very bright idea of putting up a barricade between the sidewalk and the street meaning, the only way to get in your pace group, other than climbing under or over the barricade, was to push your way all the way back to the end of the barricade on the extremely crowded sidewalk packed full of people who can only shuffle in a forward motion and then, push your way all the way up to your pace group. It was like a mosh pit where no one was having any fun. People were getting grouchy. People were pushing. Being a slower runner, I sincerely wanted to make it to the back but there was no way to move back. Faster runners sincerely wanted to make it to the front of the pack but there was no way to move forward. What did this mean? I ended up getting in line with the 9 minute mile pace group. I got passed for the first two miles like I was standing still. Not a big deal for me but frustrating for those people trying to pass me, I am sure. It was so crowded we could not all stay together and we lost everyone in our group except for me, Sissy and Heather. Endurance Magazine, get your starting line better organized next year! You can’t add more runners to this race if you don’t figure this out!

Once I made it out of the mosh pit, things evened out a bit but we were flying because we were being pushed along with the stream of faster runners. Heather and I slowed our roll a bit but Sissy kept right up so we lost her. Around mile 4, we got into our groove and headed up Franklin Street. The clouds parted and the Carolina blue sky was revealed as we hit West Franklin Street – totally fitting! There was a band up near the Top of the Hill distillery. Last year, they gave out shots of liquor but no shots this year. At about the 5 mile mark, we saw a man being picked up in an ambulance by EMS. Then, we saw two women throwing up on the side of the road. Did I mention it was really humid? I was sweating from every pore. My shirt, visor and running skirt were so wet, it looked like I had jumped in a pool.

The course took us back through campus and into Gimghoul, the first set of big hills. Heather and I powered up them all and were making great time. We caught up to Sissy and Laurie on the downhill on Raleigh Road and stuck with them until we all were separated again on Laurel Hill. We saw a couple of more people throwing up. I guess you’ve figured out by now that it was hot. At the bottom of Laurel Hill, Sissy, Heather, Laurie and I all agreed that each woman was for herself on this hill. Whatever we had to do to make it up the hill, we would do and we’d see each other at the finish. Heather pulled ahead. I powered up the first steep incline but, by the time I reached the man playing the giant horn in lederhosen, I had to walk. It was a fast walk and I was passing people but still, a walk. I ran the flats, only to walk, again on the steepest part. My first and only walking during this race. I ran the rest of it – no intervals. I hit the top of Laurel Hill and I could still see Heather but I could not catch her. Sissy and Laurie were just a little ways behind me.

After Laurel Hill was behind me, I headed down Ridge Road and was really missing the big finish in Kenan Stadium since it was being renovated. When I was right in front of Bosahmer Stadium, I started to think that I wasn’t feeling too well. “Just finish the damn race” I told myself and kept running. I turned the corner onto Stadium Drive, knowing the finish was near, only to discover yet another hill. In the full-on sun with waves of steam coming off the street. Now, I really did not feel well. I felt dizzy and nauseated but I just kept running (I am sure that you have figured out that runners are like lemmings and we just keep moving forward, despite pain, puking, dizziness). I saw the finish and the clock and sped up to beat my time from last year. I hit the finish line and, immediately, the world started to spin and I feared I was going to faint. Orange County EMS was lined up at the finish intently watching runners. I must have had a look on my face that they knew because, almost immediately, an EMT had his hand on my arm and said “M’am, are you OK?”. “No” I said, “I might pass out or throw up or both”. He took me in the medical tent, made me sit down and put my head between my knees and he got me Gatorade. The world stopped spinning but I started shaking, uncontrollably. Then, I got chills even though sweat was rolling off my body into a puddle on the ground. Another runner came in and puked all over the tent. A third person was being transported to the hospital because her heart rate would not go down. It was, basically, carnage in the medical tent (and apparently, a HIPPA-free zone since people’s Private Health Information was being bandied about).  They weren’t really sure what was wrong with me. I was clearly overheated but did I have low blood sugar, was I dehydrated, did I have an electrolyte imbalance?

After two Gatorades and a bag of pretzels, I felt well enough to leave the tent and go get my medal. I finally found Heather and Lesley and we wandered over to the results tent. I looked at the paper they handed me – I had beaten my time from last year but well over a minute! A new PR and a near death experience all in the same five minute time span! We walked over to Top of the Hill and got our free beers. Blueberry Wheat is my favorite! I never felt great for the rest of the day and night. I don’t know what was wrong with me. This is not the first time I have nearly passed out at a finish. It is also not the first time I have had electrolyte issues. I really need to figure this out before marathon training begins.

Free beer is the best beer!