Those are the only lyrics from that song that are remotely applicable to my race or my life, for that matter! I’m not pimpin’ and I don’t roll weed. I’m a middle-aged mom who likes to run but I like Snoop Dog – he seems like a cool dad! It was so hot and humid on Saturday. Like tropical hot. Like, “why in the hell are you running this race hot?”.

Heather ran this race last year and had so much fun (plus, the race shirt is really cute) that I decided I wanted to run it this year, too, even though we had Ironman 70.3 Raleigh the next day. After my nutrition/electrolyte issues and heat exhaustion after the Not So Normal Half Marathon, I was a little worried about running two hot races on consecutive days but I signed up against my better judgement. I also signed both kids up for the Kids Race around the infield of the old Durham Bulls park.

I deiced to consult with a sports nutritionist to see if I could get a handle on my issues. When I showed her my race schedule, she threw me some shade because I think she thought I was crazy to run two back-to-back, hotter than hell races but then, she committed to helping me figure this shit out. She, basically, told me I was doing everything wrong. I’m not taking in enough calories before, during or after my run or the right kind of calories. Y’all know I have no trouble taking in calories when I am not running but lots of long, pukey runs during marathon training turned me off of taking in calories before, during or after runs. Apparently, this is a dumb idea when you are an endurance athlete (typing the words “endurance” and “athlete” in reference to myself still makes me hesitate but, as Mike said, how many races and 100 mile plus months do I have to put in to call myself a “real” runner? I think I’ve earned it, even if I am still fat and slow).  I also have an electrolyte deficiency – hello, excessive sweat. She gave me a race week eating and hydration plan.

I followed her plan, like the compliant person I am. I’ll write more about it in my Ironman post but let’s just say the lady knows what she is talking about! Heather, by the way, also knows what she is talking about because I tried many of the products HJ swears by that I shunned in the past because I was afraid I was going to puke them up and HJ was right. Eating and drinking helps you run better. Who knew? : )

Saturday morning, I woke my poor children up at 5:45 AM and loaded them into the car. Let’s just say that Colin is not a morning person. We picked up my Oiselle teammate, Allie, at her house. Allie is a professional runner who is a member of the Oiselle Volee (that is French for “badass” – OK,OK it is French for “flight” or “flock of birds”) and is sponsored by Bull City Running Company. When I pulled up, Allie was running up and down her road, warming up. Allie is so fast she had a legitimate chance of placing in her age group at this race, which was serving as a USTAF NC 8K championship. She is also a super cool, super nice, generally awesome person whom I would not have met if not for Oiselle. Have I mentioned that not only do I love, love, love their clothes, I love their women-strong message and all of the fabulous people I have met through my Flock membership?

We parked and I hit the port-a-potty line, which seemed longer than my labor with Carly. Colin completely freaked out about all the poop in the port-a-potty and the smell but that is a topic for another blog and something he is just going to have to get used to if he wants to go to a concert or a music festival in his lifetime. I met up with my other Oiselle friend, Rose, who I feel like I have known forever. I think we are kindred spirits. Rose was a one woman cheering section for all us Oiselle girls. We also met up with Meghan, another Oiselle teammate. I was waiting for Heather, who was sitting in her car writing home health visit summaries, while I stood in the bathroom line. Multi-tasking, HJ and I are the champs. Heather made it right before the race started. We just lined up in the back since this was the 8K championship and we’re not that fast. I saw our Fleet Feet friend Melody, who was amazed we were doing two races in two days.

Heather and I decided that we would do run/walk intervals because I was supposed to be taking it easy with IM the next day. The race started downtown and we wound our way down towards Duke campus. All of the intersections were manned by Durham police officers who were all really friendly and cheered us on. The volunteers were amazing, pointing us in the right direction and sounding cow bells. There was not a ton of crowd support but there were lots of runners. We ran all through Trinity Park and back down towards the ball park. The last bit was a pretty massive uphill, back through the Downtown Loop but that just made the fast downhill finish, all that much more appreciated. The race ended in the ball park so we ran around the outfield, finishing up right before first base. It was so much fun! It was so hot but I actually felt really good when I finished. No heat or nutrition issues at all. I think you run a hot race slow and easy. I think you follow a good electrolyte loading plan.

Rose took this great shot of us with air under our feet! Every runner strives to have race photos of them actually running. 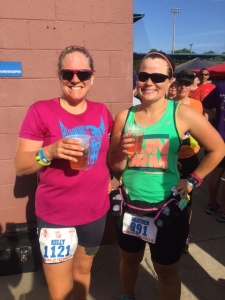 Next up was Colin’s race. He was racing around the infield with kids ages 1-5. He was so excited and had “trained” for a couple of weeks, which consisted of running around the house while Mike and I fashioned a finish line for him. He started in the back of the pack but slowly picked off some other kids to finish as a solid mid-pack runner, just like his mama! He high-fived Wool E. Bull at the finish. Carly’s race was next. Carly started in the back and pretty much stayed there! It was hot and she had watched her brother while I ran so I don’t think she was at her best. It was still fun. I tried to get a picture of both kids but they were not having it.

After the race, we walked over to the Durham Farmer’s Market and bought some veggies. We hit the food trucks right outside the market and I had the best biscuit with fried egg and tomato, which I ended up giving to Carly after she tried it and would not give it back. I absolutely loved this race and I will absolutely do it, again, next year. The atmosphere was mellow and the course was really fun. Even though it was the 8K championship, everyone was pretty chill and it was just a fun, easy morning run!