What a difference a year makes! I ran the NSN Half last year and it was miserable. It was hot. I wasn’t wearing the right gear. I didn’t have the right nutrition plan. Did I mention it was hot? There were a ton of hills. We got off course (yay, an extra hill) because the course wasn’t marked clearly. It was hot.

We ran into Becky, another Oiselle teammate, at the start.

This year, the race was 5 weeks earlier in the year so the weather was beautiful (aside from the pollen). The weather was perfect, sunny and cool. My Oiselle teammate and great friend, Rose, agreed to run this with me so I wouldn’t be too lonely. Rose just ran the Tobacco Road Half Marathon with our teammate, Caitlin, where Rose earned a 12 minute PR. Rose has had hip trouble over the past few years but she fought back by being very diligent with her PT exercises and not giving in to the temptation to “run through injury”, which is the temptation I give into every single time. I really admire her perseverance and badass attitude. She also has a wicked dry sense of humor that I love! Plus, I’m pretty sure she loves me for me and you can’t beat that.

I chose the NSN over the Rock N Roll Raleigh largely because I hate the Raleigh course. It is cruelly hilly. Like so hilly there is no need for it to be so hilly. I’ve run it two years in a row and said to myself “Why in the hell I am doing this? This is not fun”. Hills are not my friend or, maybe, I’m just a wimp but why do this if it isn’t fun?  I also like the fact that the NSN start is 7 minutes from my house, it supports local charities and, Jay, the race organizer is a Fleet Feet participant in the training programs and an all around great person.

Carly recruited many of her friends to woman the water stop near her middle school so I knew there would be friendly faces on the course. Mike isn’t really a race spectating kind of guy. In his defense, I spent the first 20 years of our relationship as a couch potato and I don’t think he ever thought spectating marathons would be part of the deal and he was there for my very first marathon so I think that counts for something. I wish I could be one of those women whose kids pop up all over the course with funny signs and a smiling husband but it isn’t going to happen and Carly makes up for it in spades so I’m good. It was extra nice to have Rose out there, though. 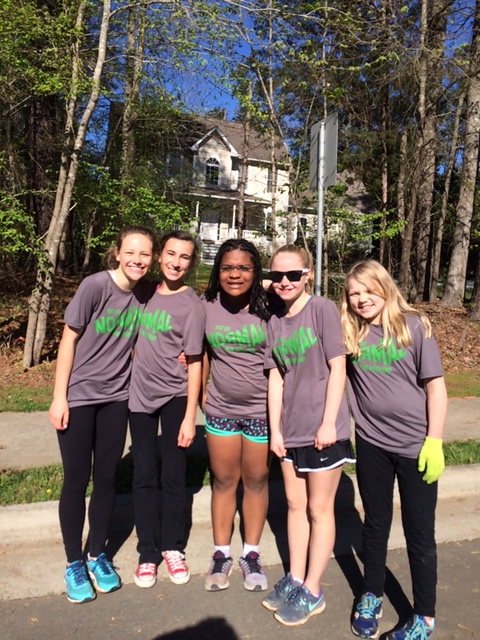 I really had no idea what I was capable of during this race. My pace has slowed, a lot, since my PR days last Spring (ironically, my half marathon PR is from last year at RNR Raleigh on the hilly course). I’m not really sure why. I’d like to figure it out. Was it marathon training in the worst of the heat of the Southern summer for MCM when I had to slow down so much or risk puking on the side of the ATT? Was it coaching the interval run/walk group at Fleet Feet and running a significantly slower pace for most of my runs this Spring? Was it not running longer than 13 miles? I really don’t know. I just know I am much slower and a part of me is sad about this. Most of me is happy because I loved coaching, I loved my interval people and I love Fleet Feet. I’m pretty sure it was worth it.

It is all relative. I wasn’t happy with my pace when I PR’d. I called myself slow, then. I am even more slow, now. Almost back to my pace for my first half marathon, the Disney Princess, where I was so proud of myself, me, a non-runner for 40 years, completing a half marathon! My other dear friend and our Oiselle regional leader, Allie, asked me on Friday why I am so hard on myself. I really don’t know. Intellectually, I know that every run is a gift. Things could change in an instant and I might not be able to run 10 feet much less a half marathon. I still strive for the ever elusive perfection. I’m sure if I met my current definition of perfection it still wouldn’t be enough. I pause to appreciate my success for about 5 minutes and then move on to the next goal.

Rose and I ran and chatted, chatted and ran. The double loop course flew by until around mile 11. Then, my asthma was bad (I took my inhaler from Carly at mile 8) and my hip was so very cranky. I took a few more walk breaks but dear, sweet Rose stayed with me every step of the way. I normally feel like I am holding people back or they are only staying with me our of pity or they run off and leave me. I didn’t feel that way with Rose, at all. I felt like she wanted to be there with me. I felt like a team, which is what Oiselle is. We brought it in strong and I beat the time I set in my head as totally unacceptable by about 5 minutes so I’m going to call this race a success. Any run that doesn’t end in the medical tent, is a plus! My PT (and let’s be honest, here, my friend at this point), Smurti, was at the finish. She realigned my hypermobile hip and made sure I was on her schedule for the week. We ended up doing a lot of Graston on my Soleus and Achilles at my appointment, again, and discussing what to do for my hip joint that will not stay in place. It is becoming abundantly clear that this hip, in its current state, will not be able to handle a marathon so I have to fix this problem before Kiawah in December. I’m getting custom orthotics to help out but the old mare just ain’t what she used to be! 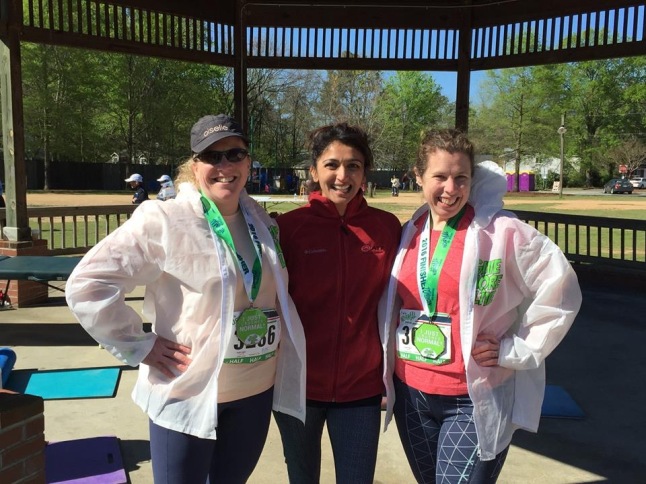 It really pays to have your very own PT at the finish line!

This past Sunday, Heather, Lauren, Danny and I spectated for our Fleet Feet participants in the pinnacle race of the training season, the Raleigh Rock N Roll. Heather and I  know what runners need so we set up shop at mile 8 of the race. We held up funny signs (yes, they were political but if you don’t know where I stand by now, you don’t really know me), we passed out Red Vines, we played Taylor Swift and we shouted encouragement to everyone. After the back of the pack half marathoners came by, we packed up and moved to mile 22 of the marathon, which is at a very desolate place on the course. There was no one, and I mean on one but me, Lauren and Heather out there.

Our sign game was on point and we got a lot of laughs.

When we got there, the under 4 hour runners were coming by. They looked great. They didn’t pay much attention to us because they were focused. As the 4 hour pacer passed, the runners started to interact with us. They laughed at our signs, they waved, they said thank you to us for standing out on the desolate stretch of road, cowbelling, dancing, joking. Some of our Fleet Feet folks came by. We cheered them on. As the 5 hour runners came through, we really started looking out for our Fleet Feet people. Runners were coming by pretty much one at a time.

The first Fleet Feet person we saw cried when she saw us. I know from experience that mile 22 of the marathon is a shitty mental place, especially when you are running alone. You’ve come so far but you still have a ways to go. I know that 4 miles doesn’t sound like a lot but after being on your feet for over 4 hours, it sucks. Heather jumped in and ran with her. Our next runner came by and she looked great. She smiled and waved. The runner after that looked wonderful and is someone I have been running with since I started at Fleet Feet. She was focused, she was fast and she looked great. I jumped in and ran with her but she didn’t need me! We waited for our final two runners who came by and were hanging together. They were actually smiling! I ran with them a bit even thought they didn’t need it, either. We waited on our corner until the very last person in that race came by. We cheered for her and rang our cowbell and she smiled. The sag wagon was on her heels. The literal street sweeper was behind her, picking up trasj. She smiled and plodded. I tip my hat to the last runner in any race but the last runner to finish a marathon is a rock star in my book.

My summer holds a new chapter for me, a speed series to focus solely on track workouts twice per week in the oppressive heat of the Southern summer. How will it go? I have no idea, but for the 4 of you who have read all the way to the bottom, hang on for the ride with me and I’ll tell you all about it! I’ve got the Tarheel 10 Miler and the Biltmore 15K left this Spring but my racing schedule is pretty clear until my next half marathon in September. A couple of small races and marathon training begins in August. I hope I have what it takes to get her done, again.