I ran the Wrightsville Beach Marathon as a three woman relay team on Sunday with Heather and her friend Lesley. In my mind, I decided I wanted to run my 5.5 mile leg of the race at a pace with a 10 in the front instead of an 11, the pace of my usual long training runs. Typing my pace in this blog feels more scary to me than telling y’all how much I weigh. Slower runners often feel self-conscious about their pace. It feels so personal. Given how last week went, when I just did not feel good on any run, I was worried that I would not be able to make my goal. Not that Heather or Lesley would have cared but I did. Every time I toe the line at a race, it has absolutely nothing to do with any other person at that race. It is about beating myself and about whether or not I can achieve my goals.

Saturday afternoon, Heather, Carly and I loaded three dogs into the car (Heather is dog sitting for her parents) and headed down to Heather’s parents house in Wallace, NC to meet Lesley.  I had my typical pre-race dinner of a Guinness and split an order of nachos with Carly.

The wake up call for the race was 4 AM. Brutal. We got to the start at 5:50 and let Lesley out. She was all chipper and ready to go. She had the 11.3 mile leg. I was grouchy because I had not had coffee and had about  4 hours of sleep. Fortunately, the parking for the relay teams was in the parking lot of a coffee bar. We made Carly go stand at the door so she would be the first person in line when they unlocked the door at 6:30. I got a latte and a bagel. I never eat bagels (even though I love them) but I was not feeling it so I thought I might need some nutrition. Watching everyone get ready for the race, I was so happy that I was not running the full marathon on my own. The mental place you have to get to to step up to the start of a full takes a while to get to and I am not there yet.

The course consisted of several loops from Wrightsville Beach into Wilmington. Our exchange spot was at about mile 3 of the first loop, mile 11 of the second loop and mile 16 of the third loop. Carly, Heather and I headed out to stand on the median to watch the first runners come by. The first pack came through at about a 6 minute per mile pace. These are the people who don’t drink beer and eat nachos the night before a race! These people were in it to win it. They looked good (seriously, there were some seriously hot dudes in this race – we were well rewarded). Lesley came through at about an 8 minute mile and we waved and cheered. That girl is fast! Lesley texted when she got to mile 10 so we knew she was on her way – running and texting at her pace is quite a skill. She came into the corral, we exchanged the bib and I was out on the course before I knew it. 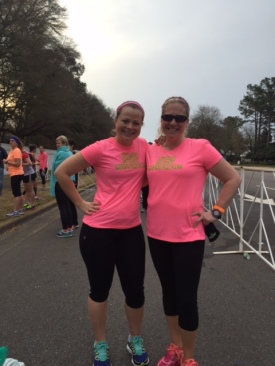 Remember, I was out with the 8-9 minute per mile group so I just jumped right in and kept pace with them. As I headed up the drawbridge, I looked down at my Garmin – I was running 8:40. “Slow it down” I said to myself, “I know this is fun but leave some in the tank”. The course was flat. Like pancake flat. At home, I normally run up Franklin Street, MLK to Franklin, Hillsborough Street, Laurel Hill, the Gimghoul loop, Manning Drive, Columbia to Franklin past the medical school. Hills, hills, hills on every run. On this flat course, I felt like I could fly. The entire elevation gain was only 35 feet. Yes, 35 feet and that was up the drawbridge. I just had such a good attitude once I was out on the course. There was no negative self-talk in my head.

I focused on the scenery. I got the most scenic loop. Lesley passed the intercoastal waterway and the beach but it was dark when she went by. I was running in light even if it was overcast. The humidity was high, though. I was dripping sweat by mile 1. I crossed three bridges. People waved at us from the balconies of their beach houses. My Garmin peeped to alert me to my first mile spilt – 9:10 and it felt really good. “What the hell”, I thought, “go for it”. I kept the pace for the first two and a half miles. Before mile 3, it started to feel harder but I repeated a mantra to myself “Run the mile you are in, run the mile you are in.” I dialed it back a tad but kept going. Each time my Garmin counted down a mile, I was so surprised there was a nine in the front. When there was only a half mile left, I went into a full on sprint. I have no idea how fast I ran that last half mile because I had no time to look at my Garmin but I would not be surprised if there was an eight in front of it!

I handed the bib off to Heather and she took off. I did not even see her go. I was too busy looking at my Garmin. Not only did I meet my goal of running my leg with at least a 10 in front of it, I blew it out of the water by running mileage with a 9 in the front! It just goes to show you that you never know what running is going to be like on any given day. I had struggled all week. I had little sleep. Was it the coffee and the bagel before the race? Was it the fact that I was running at 8:00 and not at the ass crack of dawn? Was it because it was such a flat course? Was it the excitement of the race? Was it the faster runners on the course who made me push myself? Was it because I was at the beach, I changed my latitude? I’ll never know for sure but all I know is that those 5.5 miles were some of the best miles I have ever run. I felt like I was flying. I felt like I could run forever and that, my friends, is why I run. I put up with all the shitty miles for that handful of miles that feel so good. There is no feeling quite like it.

Carly, Lesley and I headed over to the finish to wait for Heather. We got there in time to see the 3 hour marathoners come in. These were the people who were qualifying for Boston since the Wrightsville Beach Marathon is a Boston qualifier. We also saw people miss their time goal and that was sad. The more time that passed, the worse the folks coming in were starting to look. I got a little emotional seeing people finish. I know exactly how it feels. It feels freaking amazing but it also hurts like hell. I cheered, loudly, for all of them. We left Carly up at the start to take pictures of us and Lesley and I headed around the corner to look for Heather so we could run in with her. I saw her as soon as she rounded the corner. I would know her stride anywhere even if she was not wearing a matching bright pink shirt! I could tell she was hurting but she was giving it her all. Heather hates to run in humidity and it was humid. We ran in and gave Heather a few minutes to catch her breath. We headed into the food tent, picked up pizza and then went to get our free beer. We went back to the start to cheer the 5 plus hour finishers. Us slow runners need the crowd to stay and cheer. The faster runners work damn hard to be fast but us slower runners work our asses off and stay on our feet for so many hours to get it done and there is never a crowd at the end. Only our friends and family stay to see us come in.

When the results were in, I was 8th for my leg of the race. I say this not to brag. For me to come in as the 8th fastest person in anything is shocking to me. I have never been athletic. I never competed at anything until I started running. To hit my goals as a runner at the age of 43 is such a surprise to me. Two years ago, I could not walk from the parking garage to my office without getting out of breath. Now, I can actually post a respectable time at a race.

I am so proud of all of us. Lesley and I, despite having never met, hit it off really well. We’re all going to run the Tarheel 10 Miler together. Rather, Lesley is going to run really fast and wait for me and Heather at the finish line to go get beer! It was so much fun and it was such a great race. The water stations were really well manned (props to NC State who had the most engaged and best manned aid station on the course – hey, UNC where were you?), the event organizers were nice and very clear with their directions, the pre-race e-mails were informative, the expo and post-race festival were great. All in all, this was a fabulous race and we’re already planning on doing it again next year. Only next time, we’re going to come in in the top 10 instead of number 16!

Free beer is the best beer and even better when wearing an aluminum blanket.

On to the Marine Corps 17.75K Trail run on Saturday. Where the forecast is calling for snow, the race is all uphill and I won’t be posting my fastest mileage ever! Keep running, friends.